It Aint Easy Being Green During The Holidays, That's Why God Created Mole! 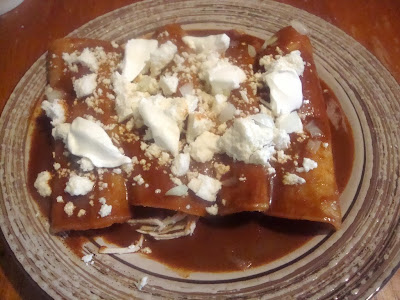 Mexico is, as we all know, the home of chocolate. This is one, among many reasons for my love of Mexican
food. So when I was sent a selection of Mexican ingredients to try from MexGrocer, I got quite excited. And what better way to express my excitement than by adapting the accompanying recipe and creating some vegetarian enchiladas using the chocolate mole sauce - something I've never made before. As the name suggests, MexGrocer is an online purveyor of authentic Mexican ingredients. This is what I received: 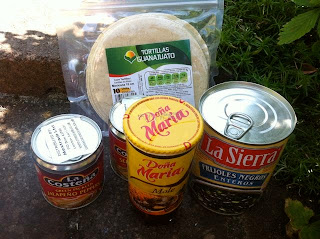 All but one of the products gave good results. The corn tortillas were smaller than I was expecting, but were nice and soft when warmed and had really good texture and flavour. The tin of pickled jalapenos was really interesting. Not only were they much hotter than I was expecting but contained pieces of pickled carrots and onions too. The black beans were very welcome as they are a particular favourite of mine.

This is how I made: 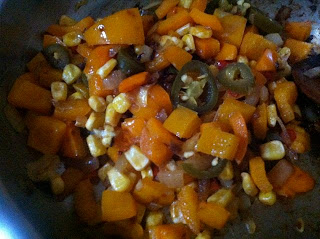 Ay ay ay! The chocolate mole sauce was really unpleasant with a horrible bitter, burnt caramel taste. It was also virtually solid, so impossible to pour and difficult to use. I don't know if there was something wrong with this particular jar or if that is how it is meant to be - seems unlikely. In order to rescue the meal, we had to scrape it off the enchiladas. 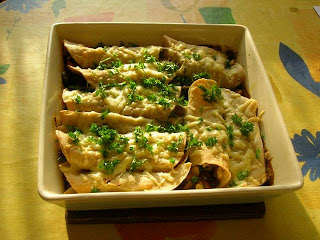 The enchiladas sin mole were delicious and had the sauce been a nice one, they would have been even better. I will be making this recipe again as it is a good one; all I need to do next time is make my own mole! That recipe coming up next, as well as some other fun veggie Mexican dishes to try this holiday season!
Posted by xanaland at 8:14 PM