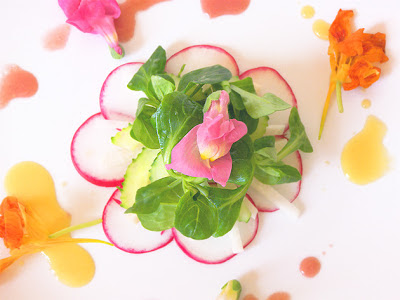 I spent about a half an hour roaming around the produce section of Whole Foods the other day, trying to find the makings for an interesting salad.  The first thing I saw was the edible flowers.  I absolutely love how they look.  Many edible flowers are quite peppery and pleasantly floral.  However, the box I bought had some varieties I had never tried, and I knew some had the possibility of being bitter.  If that were so, I didn’t want to add fruit to the salad, as I was afraid it might contrast too strongly against the bitter flowers and create some discordance.  Instead I went with a more analogous flavor scheme. I also LOVE jicama!  I chose vegetables ranging from peppery radishes, to nutty mâche, and finally to my beloved sweet jicama.  I introduced some fruity tang later with the vinaigrette.

mâche and jicama salad with edible flowers
mâche or Lamb’s lettuce
2-3 radishes, thinly sliced
1 jicama root, peeled and sliced into matchsticks
1/2 English cucumber, peeled with a lemon zester, cut in half with seeds removed and sliced into 1/4 inch pieces
vinaigrette (recipe follows)
an assortment of edible flowers (available in gourmet stores next to the fresh herbs)
1. Toss mâche with vinaigrette and set aside.

2.  Arrange radish slices in a circular pattern on a plate.  Top with jicama, cucumber slices, and mâche.  Garnish plate with more vinaigrette and flowers.

vinaigrettes
2 tablespoons red juice (such as Odwalla or Naked juice)
2 tablespoons yellow juice (such as Odwalla or Naked juice)
2 teaspoons of olive oil
2 teaspoons dijon mustard
2 pinches of salt
1.  Place the red and yellow juices in two separate bowls, and divide the remainder of the ingredients evenly between the two bowls.  Whisk again before serving. Yes, this is what the
medium gorgeous and godlike are eating tonite!
Posted by xanaland at 9:40 PM